Why limit the 'Tihar ko jhilimili' to just fairy lights and 'diyo'?

Gaming community in Nepal has developed rapidly over the years. From playing Snakes in a not-so-smart phone to playing competitive games like Dota 2 and Fortnite in a custom-built PC, we all have come a long way.

It’s DIERYA 60% gaming mechanical keyboard. The name does sound unfortunate, but it still is one of the best cases of Dierya ever! Pun intended.

Perhaps they found it a bit controversial as well, so they changed their brand name from DIERYA to KEMOVE. However, the packaging still features the DIERYA crown logo.

Since it is a 60% keyboard, it is obviously smaller than other average keyboards. It lacks a number pad and doesn’t have dedicated function keys. For people who constantly use function keys and the number pad, it might take a little time to adjust. But it’s not a big deal, and eventually, we all get used to it.

Given the size is so small, you can easily carry it around in your bags. The casing is made out of plastic, so durability becomes an issue. However, the metallic aluminum back-plate gives it a much needed sturdy finish. 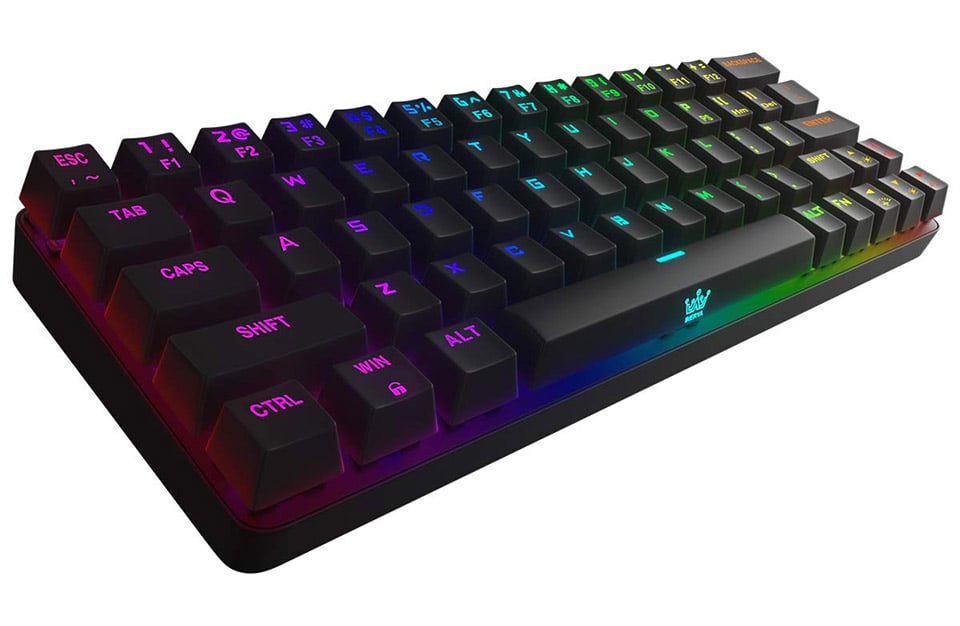 The keycaps feel quite cheap as they are ABS construction keycaps. They do have limited visibility, and it does not feel that impressive. Also, due to the oils in your hand, the built-up oil may cause the keycaps to give a glossy texture after prolonged use.

And if you want better visibility for your RGB modes, better change the keycaps. Our recommendation is the HyperX Double Shot injected keycaps.

There are two keyboard feet at the back of this keyboard. I don’t know whether I should be scared or what, but there are lots of anti-slip padding. There’s also an on/off switch to use the keyboard in wireless mode.

DIERYA mechanical keyboard can be used in both wired and wireless modes. It totally depends on you how you want to use it.

For wireless mode, it uses Bluetooth to connect to devices. It supports up to three devices simultaneously and you can also easily switch between the three devices.

Now comes the part where this keyboard makes Tihar even more “jhilimili” — RGB lighting mode. This keyboard comes with eight different RGB styles. You can also change the speed/intensity of the lighting mode by pressing the fn key along with left/right arrow keys.

Talking about the battery, this keyboard packs a 1900 mAh Lithium-ion battery that gives about two full days of use in normal mode. While using RGB, it lasts for about one full day. That’s quite impressive for a budget-friendly wireless mechanical keyboard.

For the price it comes in, it does pack a lot of features. The RBG lighting options were a pleasant surprise. Besides that, some cons can either win or kill this keyboard for you.

When I used it in wireless mode, there was a significant lag. For typists, it might not be a big deal. But for competitive games like CS GO and Dota 2, this lagging can affect the overall performance of your game. For casual games like RPG and arcade games, this keyboard works just fine. We know how many times we have died in Dota 2, Fortnite, and PUBG because of even small lags.

This keyboard doesn’t come with any software. This makes it hard to customize because then, everything has to be done manually.

No software means no macro support. The keyboard doesn’t even have onboard memory to save the macro. Buying a cheap macro adapter can solve the problem but it’s quite a hassle to buy an attachment for the macro profile.

As said earlier, it uses low-quality keycaps, so it’s better you change it. If not, these keycaps work just fine. This keyboard features ABS keycaps, but the best quality keycaps are PBT keycaps.

For a 45$, this mechanical keyboard with RGB does pack lots of impressive features. But does it perform very well? Well, yes, but only in wired mode. In wireless mode, there is a significant lag, and it may not be a suitable choice for gamers. Even for typists, the lagging can slowly creep up on you and make you frustrated.

So is it worth the buck? For the features, yes. But the lagging can make it or break it. If you have to use it in wired mode constantly, what’s the point of getting a wireless mechanical keyboard?

If you are a typist who doesn’t mind a little lag, get it. For gamers and typists who can’t stand even a slight lag as I do, better use this keyboard in wired mode.

Apple Is Coming Out With New Emojis Again, But This Time It's Different

Serial chips and chocolate eater. Thinks herbs on eggs is the greatest discovery ever! Randomly meows at any cat. Sometimes likes to talk about tech.

Airpods Pro: Everything you Need to Know Before you Buy

Apple Is Coming Out With New Emojis Again, But This Time It's Different

No Result
View All Result